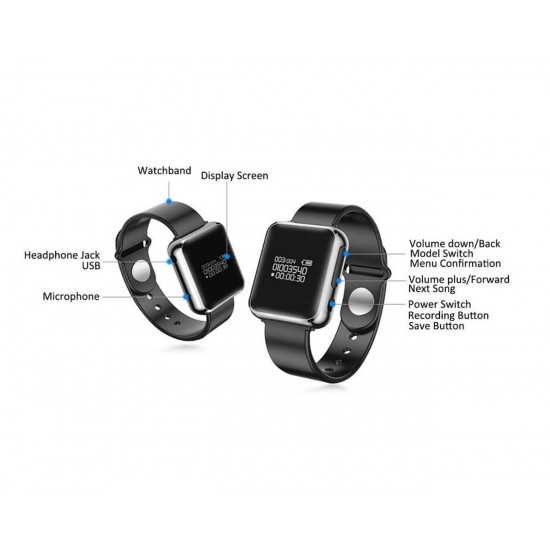 This is the ideal watch for discrete investigations. Modern watches are multifunctional combined into being an emerging technology. However this watch is not the ordinary one you find from other people, it simply performs the task of recording audio and other people’s voices in a hidden form unlike before. With one touch of the button, you will be on the way of gathering ultimate evidence in the highest quality and form. The ergonomic design of the watch makes it easily used wherever you travel, simplistic structural design makes it less deceiving for other individuals.

As your hand-worn voice recorder it has one and only task, to record footage in the highest quality. The sensitive microphone does not necessarily mean it will work too well capturing distorted background noises, specifically captures conversations and talking.

The discrete form of the watch makes it perfect for all sorts of investigations and places you want to capture audio in whether it’s an office meeting, lectures, journalism, private meetings and etc. Listening Device Spy Voice Activated Recorder Australia
What are the top qualities  that you would want in a listening device? Undetection, discretion and secrecy. In  Australia you can get mini..
$199.00
Ex Tax:$180.91
Add to Cart
Add to Wish List Compare this Product
Buy Now Question
Quickview Spy Voice Recorder Activation Hidden Best Australia
This device has many features that are not available on any other spy gadgets.  it is one of the cost-effective devices on the market.  Hi..
$119.00
Ex Tax:$108.18
Add to Cart
Add to Wish List Compare this Product
Buy Now Question
Quickview